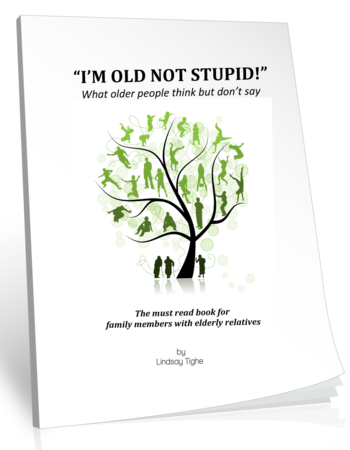 You may not be aware of it, but many of us are inherently ageist in the the way we communicate with older people. Ironically, it is especially when we want to help.  We can absolutely help people without being ageist.  But first we must learn to ask the right questions, and listen rather than tell, says Lindsay Tighe.

Have you ever caught yourself speaking to an older relative in a tone that you might use with a child, all the while with a bright smile on your face? Have you spoken about that relative in the third person… while they’re sitting in front of you? Perhaps you’ve tried to help by taking over and 'fixing' things for them…

Lindsay Tighe, speaker, trainer and business woman, noticed these ways of communicating to—and about—older people. She found such language to be prevalent in the home and in the aged-care sector. She also noticed that they signify deep-rooted ageist attitudes towards older people.

The assumption is that a person who is physically frail needs to be treated as if they are incapable and dependent. These unconscious ways of communicating have a long-term negative impact on us as we get older. This became the inspiration for Tighe’s book.

“I’m old, not Stupid” - What Older People Think but Don’t Say calls attention to our attitudes and behaviours towards older people. It also seeks to change them. It’s a guide on how to better relate to your older parents or relatives, with the aim of improving - not diminishing - their independence and well being.

Tighe has spent years training aged-care professionals in the skills they need to better engage with older people. Through her strategies, aged-care workers and family members can enable older people to live happier, healthier and more independent lives.

“Traditionally we believe that as our relatives get older we need to provide help, which means that we feel we need to take over and do things for them,” Tighe writes.

This style of ‘helping’ is automatic and unconscious, yet it leads to negative outcomes for older people’s well being.

“When people take over and fix things it often stops [older] people thinking for themselves and inevitably increases their dependency.”

Consequently, older people can be discouraged from finding their own solutions. They often feel disrespected, disempowered and resentful, which, in turn, can result in older people losing their self-confidence and self-esteem. This can be a path to depression and other mental health conditions.

According to Tighe, we can change our inherently ageist ways of communicating with older people. First, we must learn to ask the right questions, and listen rather than tell.

It’s time for a mind-set shift

While most older people want empowerment and independence, there are more complicated situations in which older people have cognitive conditions and require additional supports. There are also some older people (as there are some younger people...) who do prefer to have things done for them and have their issues ‘fixed’ for them, but these make up a small percentage when it comes to important decisions.

Tighe challenges her readers to consider older relatives as knowledgeable individuals just as they have always been, and as we all wish to remain, especially on the subject of how to make decisions for themselves, about their own lives.

With this renewed way of thinking about older people - friends, relatives and ourselves too - we shift to what Tighe calls an ‘empowerment mind-set’. This is where we become enablers, supporting people to recognise their strengths and capabilities. Our interactions should encourage older people to be capable.

“By using a more questioning approach, we unconsciously relay a message to the other person that we trust in them, that we believe in their capabilities and that they are able to be responsible. This then has a positive profound impact on them.”

Tell a person they are brave, and you help them become so.

Apt advice for how we can communicate better with older people we want to support.