How time flies when you’re having fun as you grow older. That can be said for both the EveryAGE Counts Campaign and me, as well as for our relationship over the past four years. Excitingly, I first heard about the Campaign before it was born, after its conception in the Benevolent Society, which publicly announced its imminent arrival on the basis of a bank of solid research that demonstrated the need for it as well as guiding the development of its key features.

When I read about that, I contacted the Society immediately, as I was so struck by the overlap between what was being proposed for it, and what I had been working on for several years in writing a book about ageing. The overlap was due to our complementary goals. The task that was being set for the Campaign was to tackle the ageism in our society. The task that I had set for myself was what – more recently – the World Health Organisation called for in its 2021 Global Report on Ageism, as one of its goals: “to change the narrative around age and ageing”. And, more specifically, it turns out that I am addressing one of the strategies that the WHO proposed for this: dispelling the misconceptions and reducing the prejudice and discrimination around the notion of ageing “by providing accurate information and counter-stereotypical examples”. That is exactly what my aim for my book has been, from the outset. I wanted and want to show that the older ages are simply stages of life like all the others, with highs and lows, positive aspects and challenges, that we manage in our various ways due to our individuality and our circumstances. And that we’re so much better off if we understand that, than if we go into those stages fearfully or in some sort of denial.

The thing is, of course, that if you’re tackling ageism, as a part of that you’re also going to point out the pluses of ageing, and we can see an example of that in the great publication that the Campaign put out back in the time before our lives were turned upside down by the pandemic: The Real Old. By the time it was being developed, my relationship with the Campaign and its stellar organisers (who by now have also become valued friends and mentors) was firmly established; and having been involved in the various aspects of its ongoing work, as one of its older spokespeople, I was one of the many contributors to this publication. Happily, it continues to be available online, and as was highlighted in its cover, talking about aspects of ageism included spreading the “surprisingly good news about growing older”.

Similarly, and conversely, in the final chapter of my book, I address the importance of addressing ageism as one of the ways of being pro-ageing, by working to destigmatise the notion and the vocabulary of the older ages. In it, I suggest ways that we can do this as individuals, and as members of action groups, and especially – of course – the EveryAGE Counts Campaign with the exciting expansion of the activities that it is promoting around Australia. This, incidentally, is a movement that we should be particularly proud of as the first national organisation in the world to be tackling ageism.

As a final note, on the eve of my book finally about to be published, I do feel that it’s important to acknowledge that there are challenges to older age, and that I have experienced some of them. At the same time, there are wonderful aspects to it that make me so grateful to be alive that I wouldn’t go back in time to a younger age if you paid me. For me personally, a burgeoning family and the joys of free time are two of the continuing highlights. And I do want to stress that it is possible – for those who want to have that – to enjoy new experiences into old age. Again, for me the imminent publication of the first book that I’ve written for a wide audience is a thrill to savour. At the same time, I’m including a photograph of the winners of Randwick Council’s 2020 International Women’s Day Art Prize for artworks of any medium. This is a competition that I’ve doggedly entered for years with my photographs, competing against a sea of talent. In 2020 you could literally have knocked me over with a feather, to hear my name announced as the winner of the first prize. What the photo from that day shows is that every age can count. And, as a supportive postscript to that, there was a similar outcome in 2021 (with a different judge), when – in the group in the next photo – the winner of the first prize was also an older woman. 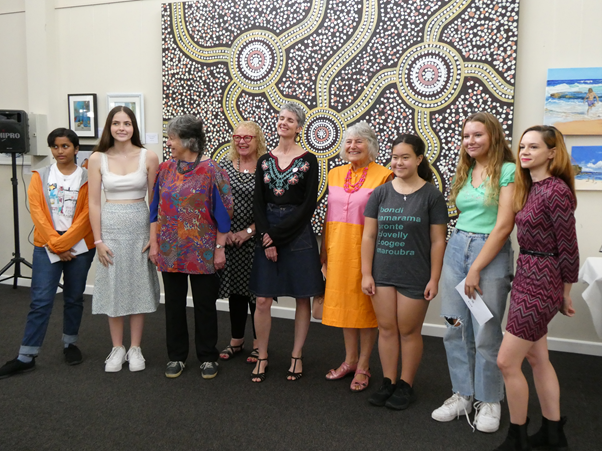 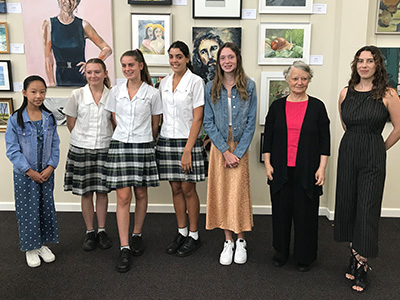